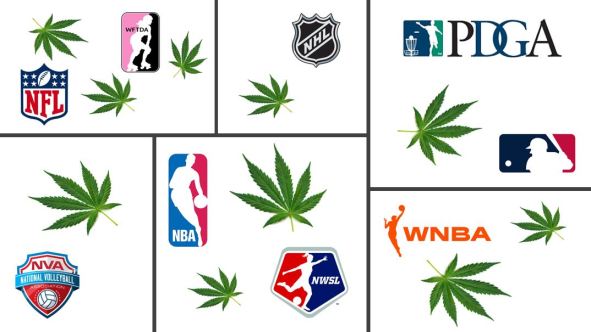 As the popularity of disc golf grows, the sport’s relationship with cannabis is also evolving. Historically, disc golfers were stereotyped as “pot heads,” a negative image that groups such as the Professional Disc Golf Association (PDGA) have worked to overcome by legitimizing the sport. More recently, disc golf has developed to the level of other established sports, while cannabis has become legal in some form in more than half the country.

As groups like Major League Baseball remove cannabis from the list of prohibited substances, and more pro athletes come out about their cannabis use on and off the field, it seems more relevant than ever to examine disc golfers’ attitudes toward cannabis.

To do this, I’ll break down the PDGA’s stance on cannabis as well as review preliminary findings from a survey of current and past PDGA members.

The PDGA and Cannabis

Vice industries have been big sponsors for sports entertainment, often filling a void of funding that would otherwise make major sporting events impossible. With recent changes in state legislation, some cannabis brands are now looking to sponsor disc golf events. The big question moving forward is, how will the PDGA respond?

Prior to the PDGA’s recent update of its Sponsorship & Advertising Policy, the rules governing sponsorship from the cannabis industry were murky. The PDGA had always excluded sponsors that promoted “illegal activity,” but did not specify whether state or federal laws would be used as its standard of unlawful conduct.

However, its current policy, updated November 20, 2019, states: “The PDGA does not accept advertising or sponsorships for products or services that promote federally and nationally illegal activities or controlled substances or that are judged to be demeaning or sexually explicit.” The new policy clarifies the legal ambiguity and sides with federal law, which seems reasonable given the PDGA’s status as a national organization with global reach.

The updated policy also added CBD products to its list of sponsorships that “require specific consideration and approval on a case-by-case basis by the PDGA Board of Directors.”

Still, whether these rules will continue to evolve with shifts in state legislation and as more cannabis companies enter the advertising space remains an interesting question. As discussed previously in Parked, the PDGA allowed the cannabis company AbsoluteXtracts to serve as the title sponsor of the 2019 San Francisco Open. At that time, PDGA Board of Directors President Justin Menickelli said that he didn’t think the PDGA would “seek a sponsor of this nature for the National Tour or any of our Majors.” Menickelli’s comments are in line with the stated scope of the PDGA’s policy, which is intended to guide sponsorship of “Elite Series and above events.”

The PDGA takes a different stance on alcohol sponsors. Although hard liquor companies are excluded, beer companies have been allowed to sponsor major events, and alcohol use is permitted at some sanctioned events (L-Tier) so long as players are not demonstrably intoxicated or breaking local laws.

PDGA rules on the use of cannabis are straightforward: “Public display or use of alcohol at PDGA events sanctioned at B-Tier or higher, or of marijuana at PDGA events sanctioned at any Tier level, even where otherwise lawful or permitted, from the two-minute warning to the time the player’s scorecard is submitted,” constitutes a violation of the player conduct standard and is grounds for immediate disqualification.

Complicating matters some, the PDGA has recently taken a progressive stance on Hemp and CBD products. As of November 2019, the association allows the use of CBD products with less than 0.3% THC. Inhaled CBD products must adhere to the same restrictions that apply to tobacco use and comply with all respective local laws and regulations.

Going forward, the PDGA faces the challenge of growing disc golf into a “globally-recognized competitive sport,” while also responding to the complex and rapidly changing legal environment involving cannabis and cannabis-related products and companies. Adding to this challenge, the PDGA is a players’ association that must respond to local interests and the views of its membership.

So, what do the players’ think about cannabis?

One of the only strong data points for this inquiry is Infinite Discs’ 2015 State of Disc Golf Survey, which asked more than 5,000 disc golfers to indicate which “extracurricular activities” they participated in while on a disc golf course. Roughly 25 percent of respondents said they had smoked marijuana. No previous study has examined the attitudes of disc golfers toward cannabis-related companies sponsoring tournaments.

In December 2019, I created an anonymous survey and posted an invitation to participate on my personal Facebook page and a few disc-golf related social media sites. I also invited a handful of players I know, including some professional disc golfers. The only requirement was to be a past or present member of the PDGA. I sent a survey link to each person who responded to my invitation.

Respondents were presented with three questions regarding tournament sponsors from the cannabis industry. I also asked a few open-ended questions and collected some demographic data. The results described below are preliminary, as data collection is ongoing.

So far, a total of 79 disc golfers have answered the survey. The respondents are from 21 different states and Canada. Many (36 percent) are from Colorado, and 67 percent live in an area that has some form of legal cannabis (17 respondents did not identify their locations). The sample is dominated by disc golfers who have consumed cannabis (92 percent have used cannabis at some point in their lives). Among the users, 58 percent consume cannabis daily, and 82 percent have used it while playing disc golf.

A few respondents offered written comments. For instance, one person commented, “Cannabis helps me focus while playing disc golf and I think it should be allowed always.” Others indicated that all substances, including tobacco and alcohol, should be prohibited at tournaments. “Competition is no longer a level playing field if people can drink, smoke or use other drugs to ‘relax’ or keep a level head during play. Sorry not sorry.”

As a small, non-scientific survey, the representativeness of these data is unknown. Yet, the results are still interesting.

As the PDGA monitors cannabis-related shifts in law and public perceptions, it should remain aware that many of its members live in areas where both the stigma attached to marijuana and the legal penalties for using it are minimal or non-existent. The results described above are likely indicative of the views of such members. The key takeaway from this small-scale study is that further research is needed to better understand the views of PDGA members, particularly those members living in states where some form of cannabis consumption is legal.

In the future, as more states legalize cannabis, we can expect that more people will think positively of cannabis, fewer people will buy into the pejorative “pot head” stereotype, and more disc golfers will tolerate, if not welcome, cannabis-related sponsors of tournaments.

Ben Owens is a journalist and tournament organizer based in Colorado. He has published widely on the cannabis industry and culture. Owens is the founder of Discs-n-Dabs®, disc golf tournaments designed to combine cannabis and disc golf in the great outdoors.

Parked is an educational blog that encourages authors throughout the world to share their views on disc golf. For this reason, the ideas expressed on this site are the views of particular individuals, not those of Parked or its sponsors.

4 thoughts on “Should Disc Golf Warm Up To Cannabis?”