Ice Bowl events have been tackling social problems for more than two decades. Since 1996, this series of disc golf charity events, played in dozens of cities, has been raising funds for good causes, amounting to over $4.55 million in total, including over $322 thousand in 2019.

Per Ice Bowl HQ, there are two key requirements for events: they must be held during the winter season and raise funds for a recognized charity, “ideally one that helps fight hunger.”

Although the war against hunger has been Ice Bowl’s primary mission in the past, for 2020, they are expanding what charities Ice Bowls can support. “The most important factor in choosing a charity is that it benefits your community.”

One of the center pieces of Ice Bowl events is the artwork on tournament discs, flyers and posters. As illustrated in the images below, Ice Bowl stamps have covered a wide range of icy subject matter. 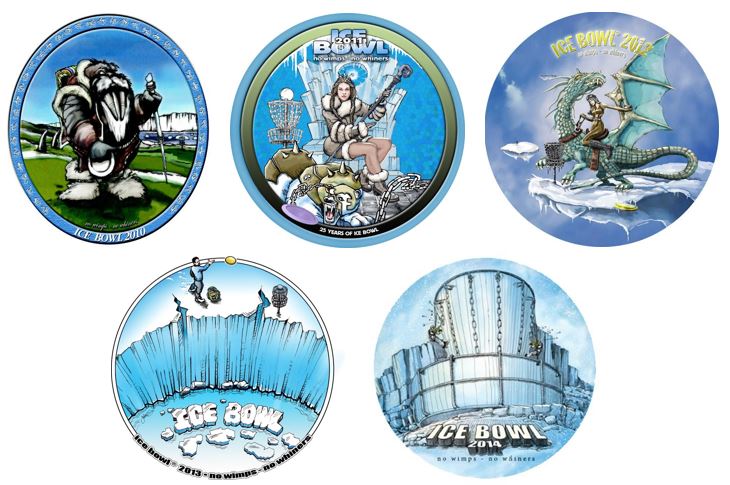 The new stamp features a lonely polar bear, perched on a tiny floating iceberg. Raindrops pelt the bear’s melting arctic habitat, forming concentric circles in the sea, where the bear’s reflection appears as a skeleton. Ominous, decaying towers loom in the background atop depleting glaciers. It looks like the polar bear is in serious jeopardy and civilization is not far behind.

Although the message seems clear to me, I caught up with Ice Bowl founder Rick Rothstein to learn more about the new artwork.

Rothstein voiced personal concerns about the environment. “You know, we only have so many oceans and so much air to breath,” he said.

At the same time, he was hesitant to offer an official Ice Bowl interpretation. “It’s art and people will interpret it as they see fit,” said Rothstein. “But I must say, this one is more poignant than the one with a woman riding a dragon.”

I asked Bill Newman, Chair of the PDGA Environment Committee, for a comment on the artwork. He wrote, “I see it as a warning that man’s activities are threatening the existence of us and other species on the planet … the bear’s reflected skeleton is quite haunting.”

I also contacted Jason Lee, Associate Professor in the School of Art and Design at West Virginia University. Lee is a long-time disc golfer who has collaborated on several works of art for stamps and t-shirts. “I feel like the bulk of disc golfers would agree with the sentiment,” he said. “It is the job of the artist to hold up a mirror and reflect but not to pass judgement or offer solutions.”

Disc golfer and art curator Kevin Kunz said he was “a bit overwhelmed by the skeleton and the reflection.” He continued, “It stands up as a piece of art, illustrating not only a global comment on the environment, but something disc golfers have surely noticed with the milder weather most are experiencing with their Ice Bowls. No matter what side you’re on with global warming, as disc golfers we are stewards for our courses and care a great deal about our surroundings.”

The artist behind the new stamp is John Dorn, owner of Throwing Art Illustration & Design. I was unable to collect a comment from him before posting this article.

If you are interested in buying a disc with the new Ice Bowl stamp, watch for announcements over the next month on the Ice Bowl Facebook page. A portion of all sales will go to Ice Bowl charities. Click here if you would like to register an Ice Bowl event in 2020.