Disc golf clubs are like unclassified plants. No one knows what they are, but still they sprout up and spread through the hills, fields and forests, bringing delight to anyone who finds them.

In summer 2013, one disc golf club, the Morgantown Mountain Goats of West Virginia, held their first meeting in the future president’s living room. The Goat founders appointed a Board of Directors, which included Shelby Dering, Shane Leiggi, Greg Hackett and Jason Lee, and started planning the future. Their initial priorities were to establish a formal league and further develop a disc golf course at Dorsey’s Knob Park in Morgantown, West Virginia.

Thinking back on the early days, Jason Lee, the Goat’s trailblazing president, said, “I remember everyone at that first get together being very excited about things to come.”

In addition to course development and league play, the club’s accomplishments would include fundraising for local charities, the establishment of well-attended tournaments, the creation of original artwork, photography and essays, teaching disc golf to newcomers, lasting friendships, and … well, lots of fun.

An early member of the Goats, Kel Cecil, commented on the longevity of the club. “It’s rare for civic organizations to stay afloat over long periods of time and over leadership changes. The club remains strong even as leaders come and go.”

More than four years after their first official event, the Goats have not missed a league. They have gathered at the top of Dorsey’s Knob Park once each week, month after month, since August 12, 2013. That makes 228 weekly league events in a row.

Compiling one of the most exotic data sets in disc golf land, Greg Hackett, the club’s current president, has entered league results into an Excel spreadsheet, which includes final scores and hole-by-hole stats for every round and for every person who has played with the Goats.

Several disc golf clubs have been around for much longer than the Goats, but this community is notable for its dogged determination to play year-round, never cancel league, and keep meticulous statistics. Going against sound judgement at times, they have held league on major holidays and played through every kind of weather imaginable.

To the other clubs in cold climes that have kept an even longer streak alive, the Goats salute you! (Please share your streak in the comments section below).

Why don’t the Goats cancel league when the temperature drops, the winds tear across hilltops, and the white stuff piles up? There may be a reasonable answer, but then, reason may have little to do with it.

Whatever it is, Jesse Wright, one of the original Goats and a fantastic photographer, captured a lot of it during a league event on New Year’s Eve, 2017. All the photos below are his. The story he tells is the Goats’. 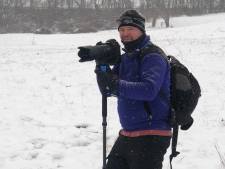 Jesse Wright wears many hats ― husband, dad, friend, news director, disc golfer. We’re lucky he also likes taking photographs. Jesse took all the shots above on December 31, 2017 under a mix of sunshine, clouds, snow and a generous helping of cold.

Parked is a non-profit, educational blog. We don’t want to sell you something. No ads. No email blasts about products. We just want to include you in the conversation. Please show your support and follow us by entering your email address below. You’ll receive two or three Parked articles per month. Like Parked on Facebook and Twitter to receive notifications.