Henry David Thoreau wrote, “What’s the use of a disc golf course if you don’t have a decent planet to put it on?”

Okay, we may have tinkered with Mr. Thoreau’s quote, but surely his point holds up. Disc golf would not be much fun on a severely damaged planet. And you don’t need to be a famous naturalist to understand that the sport itself can harm the environment. Building disc golf courses often involves cutting down trees, disturbing animal habitats and attracting herds of players who trample the fields and sometimes leave their garbage behind.

Evaluating these impacts is not easy. There are well over 6,000 disc golf courses in the United States, thousands more across the world, and each of them may have a unique set of real and potential environmental problems.

In order to generate a preliminary understanding of these complex issues, Parked teamed up with the PDGA Environment Committee. As our first step, we developed and distributed a survey. Our goal was to identify the environmental issues that worry disc golfers most in order to raise awareness about these problems and inform strategic efforts to remedy them.

In this article, we’ll tell you about the survey respondents, outline their major concerns and chart the next steps of the PDGA’s Throw Green Initiative.

A Survey of Disc Golf Veterans

Our aim was to find respondents who have plenty of experience as disc golf organizers, course designers and players. For this reason, we targeted two small populations: 1) the PDGA’s state and province coordinators, and 2) course designers on the 3DISCgolf Facebook group.

In total, 151 people took the survey (45 of the 60 PDGA coordinators responded, and 106 course designers from the 3DISCgolf group took the survey). As a whole, the respondents tended to be older and more experienced than the average player (52 percent were 45 years old or older). While the typical disc golfer has been playing for three years or less, our respondents have been playing for 19 years on average. The subjects came from 42 of the United States and five Canadian provinces.

Given that we recruited our subjects from two relatively small groups, the response rate was sufficiently high, and the results likely represent the views of the targeted population. However, the findings may not be representative of the general disc golfer population. The sample is comprised of highly committed players, organizers and designers whose generous support of the disc golf community and willingness to volunteer their time are well known.

In the first battery of questions, we asked the PDGA coordinators and course designers to consider a list of eight known environmental problems on disc golf courses. Thinking about the one course that they have played most often, they told us if they worried about each problem “a great deal,” “a fair amount,” “only a little” or “not at all.” We also offered the option “no opinion,” so that no one felt forced to give an opinion if they didn’t have one.

Three Problems Emerge Above the Rest

While the first set of questions directed respondents to rate specified problems on the course they know best, we also asked an opened-ended question and directed them to name “the most important environmental problem” facing disc golf courses in their entire state or province. All but 26 of the 151 respondents typed in responses of varying length and detail. To summarize their replies, we collapsed them into eleven categories and only considered the first problem mentioned if a respondent listed more than one.

Although answers to this question broadened our understanding, the results still pointed to the same three problems highlighted in the previous set of closed-ended questions.

When thinking about the key environmental issue in a state or province, the largest number of respondents (29 percent) mentioned trash, litter or vandalism (see Table 1). Soil issues, with most respondents mentioning “erosion” specifically, came in second place at 22 percent. And the third most important problem involved invasive insects, harmful plants and tree disease. Although the latter category included everything from oak wilt to honey suckle, the emerald ash borer, which is responsible for destroying tens of millions of ash trees in 30 states, received the most specific mentions in this category.

Beyond these three problems, the numbers dropped off considerably. Six people said that they were unaware of any problems. Another six pointed to tree damage from disc strikes. Flooding and drainage issues were also a significant concern in some regions of North America, while other respondents mentioned the natural decline of aging forests, the public’s lack of respect for nature, the limited supply of available land, and climate change.

Table 1: Summary of the Most Important Environmental Problems on Disc Golf Courses in a State or Province

We also wanted to know if the respondents were willing to help solve environmental problems on disc golf courses. As illustrated in Figure 2, the answer seems to be yes.

We asked, “How often do you make an effort to protect the environment on disc golf courses?” Most respondents said, “All of the time,” while many said, “Some of the time,” and a few reported, “Not too often.”

In a follow-up question, we asked them to describe their efforts to protect the environment on disc golf courses. Among the 151 respondents, 135 typed in answers. The replies were surprisingly lengthy and detailed (roughly 2,000 words in total)—to such an extent, in fact, that we will return to these results in a stand-alone article coming soon. For now, it suffices to say that our respondents’ concerns about the environment are linked to behaviors that protect it. 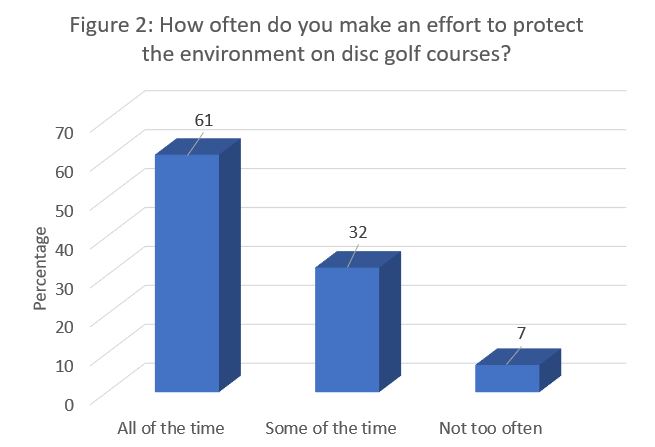 Most respondents also suggested that more should be done by the PDGA. We asked them, “Do you think the PDGA is doing too much, too little, or about the right amount, in terms of raising awareness about the environmental problems related to disc golf?” Ninety respondents, or 62 percent, said “Not enough”; 37 percent reported, “About the right amount,” and less than one percent said, “Too much.”

So, now that we’ve identified the problems, what’s the PDGA going to do about them? In the next months, the PDGA’s Throw Green Initiative will create environmental sustainability recommendations for events, courses, players and spectators, and distribute these via documents, electronic presentations and videos. The Initiative will also launch a grant program that will fund groups and individuals who exhibit leadership, innovation and results in environmental improvements at their courses and events. Finally, a fundraiser disc with custom artwork by John Dorn will be available for purchase. In addition, Parked will help create and distribute research-based content that may aid the community’s strategic environmental efforts.

If you would like to make a charitable donation to or volunteer for the Throw Green Initiative, contact the PDGA Environment Committee here. If you are interested in sharing your disc-golf related knowledge on the environment, consider writing for Parked (details here).

Keep an eye out for our next article. We’ll be comparing the views of our survey respondents to those of the US public on a range of environmental issues. Do disc golfers lean left on the environment? We’ll find out soon.