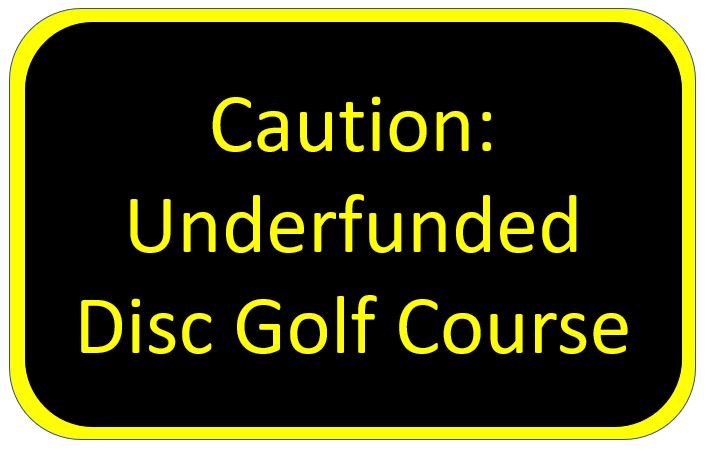 Disc golf is a player-driven sport. For decades, the players have built their own courses, created their own clubs, and told their own stories. Their volunteerism and charity are legendary. Without their common desire to join with friends and build their own worlds, disc golf would hardly exist.

Yet, the willingness of players, by choice or necessity, to shoulder so much responsibility also has downsides.

In this article, we draw on data from the 3DiscGolf Survey to examine how disc golf’s do-it-yourself development is associated with a lack of institutional funding, concerns about greater safety, and inconsistencies across the nation’s roughly 6,000 disc golf courses.

For many people, developing a disc golf course is a pro-bono affair. Roughly 65 percent of the course developers in the 3DiscGolf Survey have never been paid for their design work, and 74 percent have never been paid for their installation and construction jobs. Given that roughly 90 percent of disc golf courses are in public parks, the free labor of U.S. course developers amounts to a monumental gift to the common good.

But the question remains: Why don’t designers and builders get paid like everyone else? Tennis courts, baseball diamonds, football fields. Hiking trails, gazebos, boat launches. Just about all other sports and recreational amenities in public parks are usually built by people who receive paychecks.

To quote the famous line from Caddyshack, “How about a little something, you know, for the effort?”

The difficulty of raising public funds appears to be a significant obstacle to disc golf’s growth. 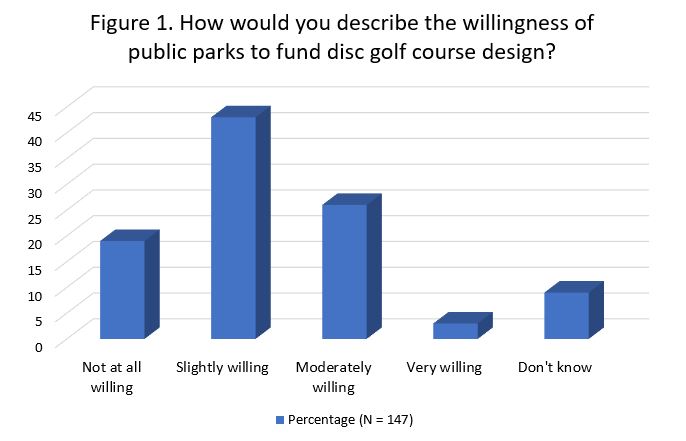 A second question asked respondents to speculate about why public parks are unwilling to fund disc golf course design. Respondents could check up to three of the items listed in Figure 2. The item receiving the most votes was “budget limitations” (27 percent). But many respondents also pointed to park officials’ “lack of knowledge about disc golf” (25 percent), their “misunderstanding of the potential demand for disc golf” (20 percent), and “negative attitudes toward disc golf” (9 percent).

If our respondents understand public park officials correctly, the challenge of growing the sport and raising money for public courses comes not only from budget constraints, but also from park officials’ lack of knowledge and negative attitudes toward disc golf.

Course design and development fundraising should be regarded as a hearts-and-minds campaign, and not just a budget battle. 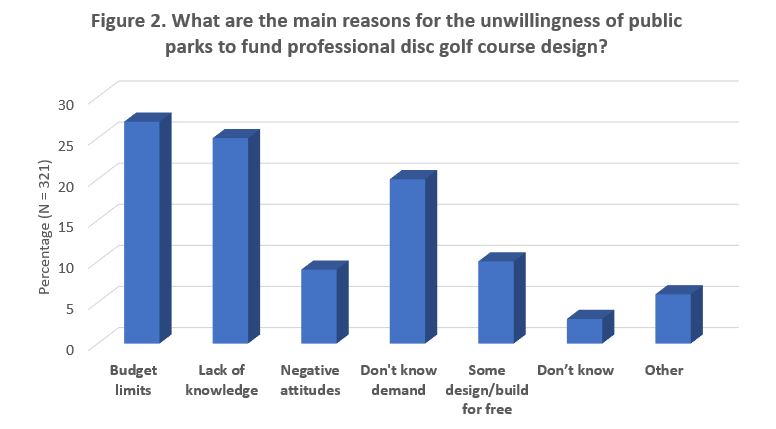 One key to persuading stakeholders to fund disc golf involves the perceived risk of the sport and liability concerns. Although a probabilistic estimate of actual risk goes well beyond the scope of this study, the 3DiscGolf Survey offers insight on one group’s risk perceptions.

As discussed in a previous article, the great majority of 3DiscGolf respondents have designed, co-designed or helped construct at least two disc golf courses, with 22 percent having worked on ten or more courses. Their answers to the following questions represent the first study of perceived risk on U.S. disc golf courses.

Two questions focused on the likelihood of being struck by a flying disc. We asked respondents to think in general about the courses they have played and indicate how often they see a disc golf hole that presents a serious risk of someone being hit by a disc. Responses were tabulated on a five-point scale (never, rarely, sometimes, often, always).

None of the 152 respondents said “never,” and very few said “always” (2 percent). Most respondents (55 percent) reported that they “sometimes” see holes presenting a strike risk, while the others were split between the responses “rarely” (19 percent) and “often” (24 percent).

As illustrated in Figure 3, we also asked about the percentage of courses that have at least one hole that presents a serious strike risk. Responses to this question varied widely as well. On one end of the spectrum, nearly half the sample placed their estimates between 1 percent and 15 percent of courses. On the other end, roughly 20 percent of respondents said that most of the courses they have played have at least one hole where there is a serious risk of someone getting hit by a disc. 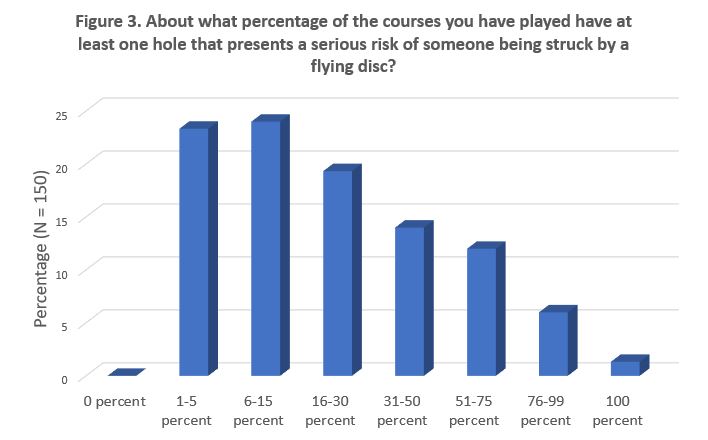 While there was little agreement among respondents on the likelihood of being struck by a disc, there was strong consensus on the type of holes that present the most concern. As shown in Figures 4 and 5, most respondents identified “holes near walking paths, playgrounds, ball fields, or other park amenities” as both the most common risky hole design, as well as the most dangerous type.

The sport of disc golf appears to be growing quickly and may be reaching a tipping point. Almost all disc golf metrics—courses, PDGA members, PDGA- and non-PDGA events, and media coverage of the sport—are following healthy upward trajectories. More than 200 colleges in the U.S. are competing in disc golf, and some observers have Olympic aspirations for the sport.

Yet, as demand for disc golf increases, the sport is experiencing growing pains. Disc technology is evolving faster than the process of updating and redesigning disc golf courses. Today there are far more disc golfers throwing far greater distances than two decades ago.

Many disc golf courses were developed at a time when flying discs presented less risk to players and pedestrians. In the past, many local communities, working in the do-it-yourself tradition, simply did not address risk-management issues when they built their courses.

Today, players are demanding longer, more complex, and challenging designs. As the PDGA warned in a recent report, “Design expectations and requirements have advanced to the point where land stewards run the risk of making a poor choice by placing inexperienced local player volunteers in charge of their course design.”

Now more than ever, we need disc golf course designers and builders with advanced knowledge and experience to propel the sport forward.

But pushing the evolution of disc golf course design will not come cheap. Ideally, disc golf courses should be given dedicated, single-use spaces in public parks. Although most respondents of the 3DiscGolf Survey were pessimistic about the willingness of public parks to supply more resources, most of them saw public officials’ lack of knowledge about disc golf as the main problem.

If these respondents are right, efforts to grow the sport should be directed at improving the image of disc golf, and not only at fundraising and budget negotiations. Direct messaging to park officials may be especially important, given their low level of familiarity with the sport, per the 3DiscGolf Survey.

Reducing risk on disc golf courses should be among the goals of a hearts-and-minds campaign. Although our respondents were split on the strike risk to players and pedestrians, they agreed that disc golf holes near other park amenities present the main danger.

Education can play a role in making disc golf courses safer, smarter and more enjoyable. While there are several design firms that offer experienced design services, fewer opportunities exist for people who wish to pursue course design education. Efforts to stimulate the free exchange of ideas among experienced course designers and developers, and educate more disc golf enthusiasts would likely encourage the creation (or redesign) of courses that are both safer and more fun to play.

Public parks should also take the initiative and review their disc golf courses, particularly those with old designs, and consult with experienced designers as they bring their courses up to date.

The disc golf community has a big role to play. Given disc golf’s long tradition of do-it-yourself development, improvements are unlikely unless disc golf clubs and other grassroots groups support them.

One of the goals of the 3DiscGolf Facebbook group is to collaborate with all stakeholders and co-create best practices for course design. All are welcome. Consider joining the group today.

Parked is a non-profit, educational blog. No ads. No products. No private sponsors. Please show your support and subscribe to Parked by entering your email address below. You’ll receive two or three free articles per month. Like Parked on Facebook and Twitter to receive notifications.

Josh Woods, editor at Parked, is an associate professor of sociology at West Virginia University. His current research focuses on the growth and group dynamics of non-normative sports.

6 thoughts on “Two keys to growing the sport: Money and safer courses”